[12-09-2020] Los Angeles, CA – One Person Killed, Several Others Injured After a Wrong-Way Crash on Compton Avenue

You are here: Home / California / [12-09-2020] Los Angeles, CA – One Person Killed, Several Others Injured After a Wrong-Way Crash on Compton Avenue

A 54-year-old woman identified as Margarita Reyes was killed after a major wrong-way multi-vehicle crash in Compton Avenue on Wednesday night, December 9. 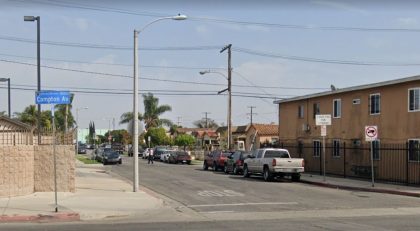 The accident occurred at approximately 6:40 p.m. on Compton Avenue, south of 81st Street in South Los Angeles. Reyes was riding a 2014 Nissan driven by George Ortega when a 2005 Toyota suddenly struck them. The 2005 Toyota reportedly drove into oncoming traffic for unclear reasons.

The 2005 Toyota then struck a 2015 Nissan driving northbound, which caused the 2015 Nissan to hit the side of a bus driving southbound on Compton Avenue.

Reyes was killed from the collision while Ortega was seriously injured. The driver of the 2015 Nissan and 4 of his passengers were also hurt in the crash. None of the occupants of the bus were injured. The driver of the 2005 Toyota was later identified as John Cardenas. He sustained significant injuries from the crash. Authorities had not arrested him as of the moment.

The crash is currently under investigation by the California Highway Patrol. They will attempt to determine the cause and the liability in the accident.

Every year, approximately 355 people are killed in the U.S. due to wrong-way drivers. With the average number of wrong-way collision deaths at 265, 1.34 fatalities per wrong-way deaths are calculated. These accidents are caused by various reasons, such as distracted driving, drunk driving, and driver over-fatigue.

When facing cases like this, it’s essential to have an experienced Los Angeles wrongful death attorney conduct an independent investigation. Attorneys have the resources that can help them prove the negligence of the liable party. They can utilize their resources to re-interview important witnesses, review relevant surveillance footage from the scene, and obtain phone and texting records of the responsible party.

It can be quite devastating and stressful to suddenly lose a loved one due to a fatal wrong-way collision.