An unidentified pedestrian was killed after getting struck by a hit-and-run driver on the highway in Chatsworth on Monday morning, October 12. 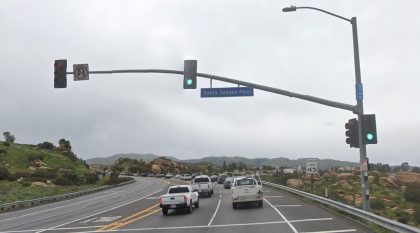 According to the Los Angeles Police Department’s initial reports, the fatal crash happened at approximately 5:30 a.m. near the intersection of Topanga Canyon Boulevard and Santa Susana Pass Road.

A dark-colored sedan driving southbound hit the man while walking eastbound across Topanga Canyon Boulevard. The sedan driver did not stop to help the victim and fled the scene. Emergency personnel later arrived at the scene and attempted to save the victim.

Unfortunately, the victim was later pronounced dead. The identity of the pedestrian has not been released. Witnesses that can provide additional information about the accident are encouraged to contact officers at 818-644- 8032 or the Valley Traffic Division watch commander at 818-644-8010.

A $50,000 reward awaits anyone that can give information that will lead to the driver’s identity, arrest, and conviction.

Local authorities are currently investigating the case. The police are now attempting to pursue the hit-and-run driver.

It is apparent in this case that the liability falls on the hit-and-run driver for leaving the victim wounded and fleeing the scene. The suspect will most likely face criminal charges once caught.

Pedestrians currently make up a large percentage of traffic fatalities in the past 33 years. According to the Governors Highway Safety Association, pedestrian fatalities in the U.S. have increased by 27 percent from 2007-2016 while other traffic-related deaths decreased by 14 percent.

When facing cases like this, it’s vital to have an experienced Los Angeles wrongful death attorney specializing in fatal pedestrian accidents to conduct an independent investigation. Attorneys have the resources that can help them prove the negligence of the liable party. They can re-interview important witnesses, review relevant surveillance footage from the scene, and obtain the responsible party’s phone and texting records.

The sudden loss of a loved one due to a fatal pedestrian accident can come as quite a shock for the family members that the victim left behind. As the victim’s family undergo grief, they may be left vulnerable to manipulation by insurance companies and the guilty party.

Through the wrongful death claim, the victim’s family can seek compensation for the damages (such as loss of income and companionship, funeral costs, pain and suffering, and emotional distress) that the fatal hit and run accident has caused them.