You are here: Home / California / [11-27-2020] San Bernardino, CA – One Person Killed, Four Others Injured After a DUI Crash a Kendall Drive

One unidentified man was killed while four children were injured after a deadly DUI crash in San Bernardino on Friday night, November 27. 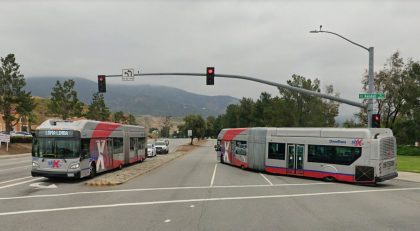 The fatal crash transpired at approximately 11:47 p.m. at Kendall Drive and University Parkway.

A Ford Mustang was traveling westbound oN Kendall Drive at high speed. The drive reportedly ran a red light then collided with a Toyota Camry at University Parkway.

The Toyota Camry caught fire after the collision. The driver was killed as a result of the crash. Four other juvenile occupants of the Camry sustained varying degrees of injury.

Two children suffered life-threatening injuries. One child had severe injuries, while another has moderate injuries. They were all transported to an area hospital for treatment.

The driver of the Ford Mustang was later identified as 23-year-old Brandon Jaquez-Perez. Authorities determined that he was driving while under the influence of alcohol at the time of the collision.

Jaquez-Perez was arrested on suspicion of gross vehicular manslaughter while intoxicated and driving under the influence of alcohol. He was detained at West Valley Detention Center in Rancho Cucamonga in lieu of $250,000 bail.

The California Highway Patrol is further investigating the crash. Witnesses that can provide additional information about the accident are urged to call Detective Dan Acosta or Sgt. Jeff Harvey at 909-384-5792.

In this case, the liability falls on the Mazda driver as he was proven to be driving while under the influence at the time of the accident.

When facing cases like this, it’s essential to have an experienced San Bernardino County wrongful death attorney specializing in fatal DUI accident cases to conduct an independent probe. Attorneys have the resources to help prove the negligence of the liable party. They can re-interview important witnesses, review related surveillance footage from the scene, and obtain phone and texting records of the responsible party.

It can be quite stressful and overwhelming to suddenly lose a loved one due to a fatal car accident. While waiting for the official investigation results, the victim’s family is encouraged to pursue a wrongful death claim with their attorney’s help. Through the wrongful death claim, the victim’s family can seek compensation for the damages (such as loss of companionship and income, pain and suffering, and emotional distress) that the accident has caused them.