An unidentified 32-year-old man was killed after a fatal DUI motorcycle accident in El Cajon on Monday morning, December 14. 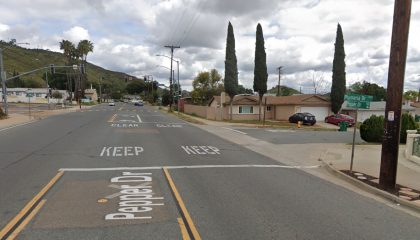 The crash transpired at approximately 7:05 a.m. on Pepper Drive near Plumeria Drive in the unincorporated Bostonia area north of El Cajon.

The victim was reportedly riding a 2005 Suzuki GSXR 1000 motorcycle eastbound on Pepper Drive towards Plumeria Drive when a 2011 Kia Sportage that was heading northbound suddenly entered the intersection.

The motorcycle then struck the left side of the Kia. The rider was ejected from his motorcycle due to the severity of the impact.

The motorcyclist was rushed to an area hospital where he was later pronounced dead. He was wearing a helmet at the time of the accident.

The driver of the 2011 Kia Sportage was later identified as 59-year-old Pamela Gilmore. She sustained minor injuries from the crash but declined any medical treatments. Authorities later determined that Gilmore was driving while under the influence of drugs and alcohol. She was booked at Los Colinas Women’s Detention Facility for felony DUI causing injury and gross vehicular manslaughter with a bail set at $100,000.

The California Highway Patrol is further investigating the crash. In this case, the liability falls on the Kia driver as she was proven to be driving while under the influence at the time of the accident.

It is undeniable that motorcyclists are one of the most vulnerable motorists on the roadway. According to the U.S. National Highway Traffic Safety Administration (NHTSA) statistics, motorcycle riders have 16 times the risk of injury and 35 times the risk of a fatal crash compared to car passengers.

When facing cases like this, it’s essential to have an experienced San Diego County wrongful death attorney specializing in fatal DUI accident cases to conduct an independent probe. Attorneys have the resources to help prove the negligence of the liable party. They can re-interview important witnesses, review related surveillance footage from the scene, and obtain phone and texting records of the responsible party.

While waiting for the official investigation results, the victim’s family is encouraged to pursue a wrongful death claim with their attorney’s help. Through the wrongful death claim, the victim’s family can seek compensation for the damages (such as loss of companionship and income, pain and suffering, and emotional distress) that the motorcycle accident has caused them.