A 41-year-old man identified as Francisco Torivio was killed after getting struck by a drunk driver in Santa Ana on Tuesday afternoon, June 23rd.

According to the initial reports from the Santa Ana Police Department, the fatal accident took place at around 1 p.m.

The victim was attempting to cross Bristol Street and McFadden Avenue when he was suddenly struck by a BMW driver. The BMW driver was later identified as a 26-year-old man named Kevin Guardado. It was unclear whether the pedestrian was walking on a marked crosswalk or not.

Unfortunately, the pedestrian died after the accident.

The BMW driver was given a sobriety test and was arrested for driving under the influence of drugs.

The Santa Ana PD officers are currently investigating the crash.

Driving while under the influence of alcohol or drugs is one of the most reckless and irresponsible things a driver can do. It won’t put their lives in danger, but it can potentially endanger other people’s lives. According to the National Highway Traffic Safety Administration (NHTSA), approximately 30 people in the U.S. die every day due to drunk driving accidents. Drunk driving accounts for about 29 percent of all motor vehicle accident fatalities in the U.S. Around sixty-one percent of these drivers have a Blood Alcohol Content of .08 percent or higher.

When facing cases like this, it’s vital to have an experienced Orange County wrongful death attorney specializing in fatal DUI pedestrian accidents to conducts an independent investigation. They can re-interview important witnesses, review relevant surveillance footage from the scene, and obtain the responsible party’s phone and texting records. 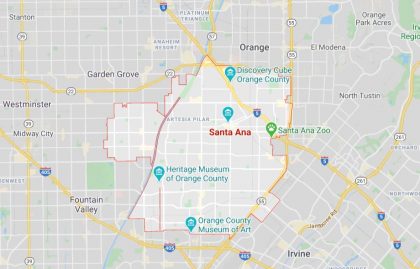 It can be quite devastating and overwhelming to suddenly lose a loved one due to a fatal DUI accident.

While waiting for the official investigation results, the victim’s family is encouraged to pursue a wrongful death claim with the assistance of their attorney. Through the wrongful death claim, the victim’s family can seek financial compensation for the damages such as funeral costs, loss of income and companionship, pain and suffering, and emotional trauma that the fatal accident has caused them.

If you have a nagging suspicion that someone is to blame for the death or injury of your spouse or family member, contact Arash Law. We have the resources you need to pursue justice for wrongful death and the experience to ensure that you get fair compensation. We’re conveniently located throughout California, with offices in Los Angeles, Sacramento, San Francisco, Riverside, Orange County, and San Diego, and are happy to visit you at your home or office. Call (888) 488-1391 for a FREE Consultation with a pedestrian accident attorney in California.