Nearly 6,000 employees of the United States Postal Service (USPS) were attacked by dogs in 2020 alone. The disturbing statistics were announced by the USPS ahead of National Dog Bite Awareness Week, which runs from June 12 to June 18. Aggressive and vicious dogs pose a threat to postal workers and the general public.

According to the Centers for Disease Control and Prevention (CDC), more than 4.7 million Americans get bitten by dogs each year, of which nearly 800,000 require medical attention. If you are a mail carrier bitten by a dog on someone else’s property, contact a California dog bite attorney to discuss your options for compensation.

Our knowledgeable personal injury lawyers at Arash Law have decades of experience fighting for dog bite victims’ rights in California. Get a free consultation with our attorneys by calling (888) 488-1391 or fill out this form to see if you have a case. 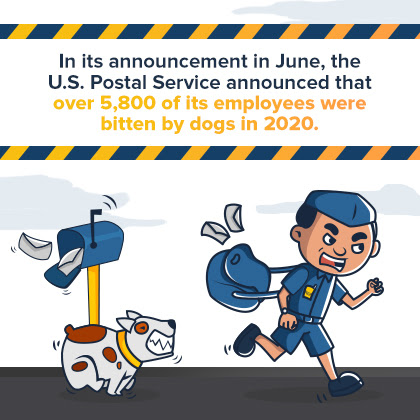 In its announcement in June, the U.S. Postal Service announced that over 5,800 of its employees were bitten by dogs in 2020. The agency said in a statement that dog attacks range from nips to vicious attacks. The Postal Service also provided a list of states and cities with the most dog attacks involving their postal employees.

The list shows that California accounted for the largest number of dog bites on mail carriers, while Houston, TX, had the most attacks among U.S. cities. The agency also noted that more postal workers were exposed to a higher risk of dog attacks due to an increase in the number of home deliveries since the beginning of the COVID-19 pandemic in 2020.

The U.S. Postal Service released the announcement ahead of National Dog Bite Awareness Week, which the agency named to be from June 12 to June 18. The agency is hoping to bring awareness to the issue of dog bites among its employees and the general public.

In his statement, the agency’s acting Manager of Employee Safety & Health Awareness, Jamie Seavello, acknowledged that while dogs are “instinctive animals” that protect their territory, it is critical to raise awareness to protect postal carriers from dog bites.

Where Do Most Dog Bites on Mail Carriers Occur in the U.S.? 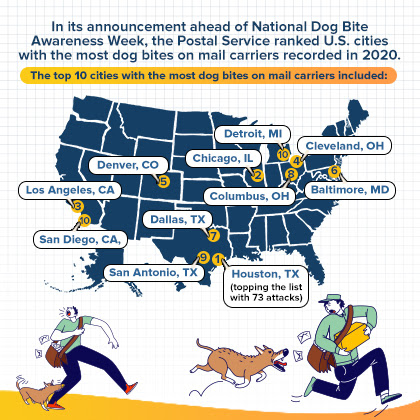 The U.S. Postal Service explained that it recorded a dog attack every time a mail carrier made an injury claim or reported an attack to their supervisor. In other words, there were no criteria for determining what constitutes an attack when recording employees’ complaints about dog attacks.

The agency did not provide data on what data breeds were involved in most attacks on postal workers. However, a comprehensive analysis of dog breeds involved in fatal dog attacks by CDC showed that pit bulls were the most dangerous breed, followed by Rottweilers and German shepherds.

How Can Dog Owners Prevent Dog Attacks on Postal Workers?

California has a “strict liability” dog bite statute codified at California Civil Code § 3342. It means that dog owners are liable for damages caused by their dogs when the person is in a public place or lawfully on the owner’s private property when they are attacked. One way to prevent dog attacks on mail carriers is to make sure that dog owners have their pets secured before the postal worker enters their property.

It is best to minimize interactions between mail carriers and dogs to prevent dog attacks even if the canine had no history of viciousness or aggressive behavior. A dog owner can take the following steps to prevent a dog attack on postal workers:

But how should a pet owner “secure” their dog when a mail carrier comes? Securing a dog to prevent dog attacks on postal workers may mean keeping the canine behind a fence, inside the home, in another room, on a leash, or simply away from the door.

The goal of National Dog Bite Awareness Week, which was announced by the U.S. Postal Service, is to educate dog owners on how they can prevent their pets from attacking postal workers and other people. The agency promotes responsible pet ownership to make sure that dog owners have their dogs secured when a mail carrier comes to deliver a letter or package.

Since dog bites are an ongoing hazard for mail carriers, postal workers are trained to consider all dogs as potential hazards. Postal employees are trained to avoid situations in which a dog may be able to attack them. Mail carriers should take the necessary precautions to remain vigilant at all times when entering property protected by dogs.

Specifically, mail carriers are trained to:

When attacked by a dog, postal workers are trained to protect themselves by putting an item, such as a mail satchel or bag, between their body and the attacking dog. The goal is to prevent the dog from biting uncovered skin to avoid serious injuries. It may also be helpful to command the dog to go away or to sit.

Dogs are more likely to attack people and exhibit aggressive behavior when stressed, provoked, or in pain. A dog is likely to become stressed when its routine is disrupted. The U.S. Postal Service noted an increase in dog attacks on mail carriers since March 2020, when dogs and their owners experienced the disruption in routines due to COVID-19 lockdowns.

If you are a postal worker who has been attacked by a dog while doing your job, consult with an attorney to find out how you can seek compensation for your injuries and damages. At Arash Law, our attorneys have handled numerous dog bite cases involving mail carriers, which is why we understand the process of obtaining compensation as an injured postal worker.

Our injury attorneys have decades of experience helping residents of California hold dog owners strictly liable for injuries and losses caused by dogs on public and private properties. We will review your particular situation to help you determine the dog owner’s liability and help you identify all options for compensation. Schedule a free case evaluation by calling (888) 488-1391 or complete our contact form.