Can Trucks Drive In The Left (Fast) Lane?

You are here: Home / The Arash Law Blog / Can Trucks Drive In The Left (Fast) Lane?

If you have been involved in a motor vehicle accident involving a truck traveling in the left lane, you might want to contact an attorney to discuss liability in your case. Contact our California truck accident lawyers at Arash Law to talk about your case.

What are the Lane Restrictions for Trucks in the United States?

The vast majority of states do not prohibit trucks from driving in the left lane. However, even though most states do not have a statewide ban on trucks in the fast lane, they do have rules to regulate the use of the left-hand lane of a freeway. 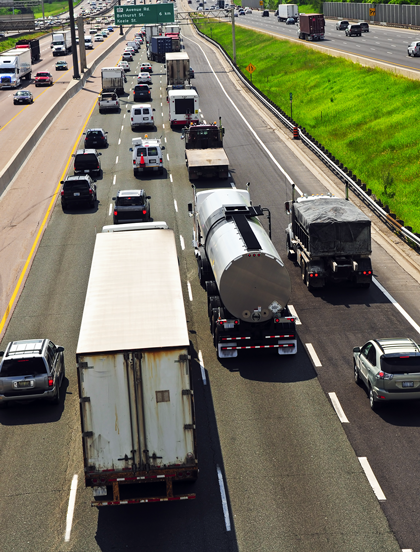 However, there are a few states that explicitly prohibit trucks from traveling in the left lane, while some permit trucks to use the fast lane in limited circumstances. There are also those that prohibit all motor vehicles – regardless of the type – to drive in the left lane except when passing other vehicles.

Many states simply state that motorists should drive in the right lanes if the speed of their vehicle is slower than the normal or legally permissible speed unless they need to pass another vehicle or make a left-hand turn. Motorists who fail to obey these laws can face serious penalties.

Even if your state does not have a statewide ban on the use of the left lane by trucks, cities or other local governments may impose lane restrictions on certain highways and roads. That is why it is important to speak with a lawyer who is familiar with traffic laws in your area to help you understand lane restrictions.

Can Trucks Drive in the Left Lane in California?

While this technically means that any vehicle can drive in the left lane in California, they will have to switch lanes any time they are moving slower than a vehicle behind them. For this reason, trucks cannot drive in the left lane on a multiple-lane freeway in California because their speed is lower than the average speed of traffic on a highway. Under California Vehicle Code § 22406, the maximum speed limit for trucks is 55 miles per hour.

Which Lanes can be Used by Trucks in California?

According to the Federal Motor Carrier Safety Administration (FMCSA), there are nearly 160,000 accidents involving large trucks each year. Truck accidents cause over 4,600 fatalities and more than 77,000 injuries. California had the second-highest number of truck accident deaths in the country (the Golden State is second to Texas).

Given the high fatality rate in California, legislators sought to increase safety on the state’s highways by restricting the use of the left lane by trucks. Trucks traveling in the left lane can not only cause traffic jams and congestion but may also contribute to devastating crashes. Under California law, vehicles that travel at a speed that is lower than the normal speed of traffic on a freeway must use the right lanes unless they are using the left lane to pass another vehicle.

Trucks may only use the lane to the left when overtaking or passing another vehicle on a freeway. In addition, California has two truck-only lanes that can only be used for trucks. Both lanes are located on Interstate 5. Truckers must follow road signs and travel in the designated truck-only lanes when driving on these sections of I-5 in California.

Truck drivers who travel in the left lane of a highway are violating California’s traffic laws. Truckers are facing serious penalties for violations of traffic rules in California. The penalties include:

If you have been involved in a truck accident when the truck was traveling in the left lane, it is in your best interests to consult with a knowledgeable attorney to protect your rights and help you pursue the compensation to which you are entitled. Interestingly, California is one of few states with such stringent lane restrictions for trucks.

Why Trucks Traveling in the Left Lane is Dangerous

Truck drivers that drive in the left lane expose themselves and other people sharing the road with them to a number of hazards. A truck traveling in the left lane is dangerous because it interrupts the normal flow of traffic. Since trucks are prohibited from driving over 55 miles per hour on highways in California, a truck in the left lane would cause traffic congestion and increase the risk of preventable collisions.

The trucker’s decision to drive in the left lane can result in a collision when other vehicles are forced to switch lanes to pass the truck on the right. A truck traveling in the left lane is dangerous for several reasons:

Trucks traveling in the left lane can be dangerous for everyone on the road, including the truck driver. For this reason, California Vehicle Code imposes the above-mentioned lane restrictions for large trucks to make our roads safer and improve the flow of traffic on highways.

Where are the Two Truck-Only Lanes Located in California?

Lane restrictions are not the only restrictions for trucks in California. Truckers and truck companies must also adhere to the federal trucking regulations, such as hours of service rules, which prohibit drivers from driving beyond the 14th consecutive hour after coming on duty. Among the many restrictions, California law also requires trucks to use truck-only lanes in designated sections of Interstate 5.

The two truck-only lanes are located on Interstate 5 at:

Failure to use the proper lane can result in serious penalties for the truck driver.

If you have a car, you probably know by now that you should always exercise caution when driving near 18-wheelers, semi-trucks, and other large trucks. However, you should take additional precautions when driving near a truck that is traveling in the left lane. Trucks have the largest blind spots compared to all other vehicles. A truck’s blind spot to the right extends across two lanes of traffic.

The blind spot in the rear extends as far as 30 feet behind the back of the trailer, while the front blind spot may extend 10 to 20 feet in front of the cab. Thus, when driving near a truck traveling in the left lane, you should be aware of its large blind spot to the right when passing the truck. The truck driver may not see your vehicle if you linger in the truck’s right blind spot. As a result, the collision may occur if the trucker decides to change lanes.

If you see a truck traveling in the left lane, take the following precautions to avoid collisions:

If you see a truck in the left lane, it is easy to lose your temper because you know that the trucker is violating California’s traffic laws. However, keep a cool head and avoid road rage or aggressive driving because these two behaviors may contribute to a preventable accident.

What to Do After a Left-Lane Truck Accident

While California law imposes many restrictions and traffic laws to keep you and other motorists safe, accidents may occur when someone fails to obey the rules. If you were involved in a traffic accident involving a truck traveling in the left lane, you might be entitled to compensation for your damages and losses.

Take the following steps if you have been involved in an accident involving a truck in California:

Get a case review from our truck accident lawyers at Arash Law to discuss liability in your particular case. Just because the truck driver was traveling in the left lane does not necessarily mean that they are fully at fault for the accident. You may also be held responsible if you contributed to the crash. Call (888) 488-1391 to talk about your case.