Two people were killed while three others were hurt after a multi-vehicle crash in Vail Lake, east of Temecula, on Thursday afternoon, December 3. 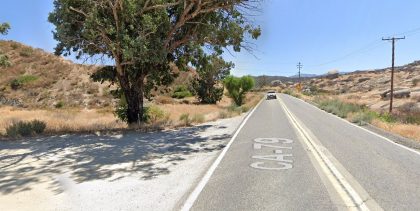 According to the local authorities’ initial reports, the accident occurred on Highway 79 near Dugan Drive at around 2:30 p.m. A 2002 Honda Pilot was traveling south on the highway when, for unclear reasons, it veered onto the right shoulder and collided with a rock embankment.

The Honda rolled over into the northbound lanes due to the severity of the impact, where it later crashed into a 2013 Jeep Wrangler. The crash caused both vehicles to overturn, with the Honda rolling into a side ditch.

One of the vehicles then continued and later collided with a 2017 Nissan Frontier pickup truck on the roadway.

A 56-year-old male passenger of the Honda and the driver of the Jeep were killed in the collision. They were pronounced dead at the scene. The Honda driver was seriously injured. He was taken to Wildomar’s Inland Valley Medical Center for treatment.

The California Highway Patrol is currently investigating the cause of the collision. They will attempt to determine whether drugs or alcohol may have contributed to the accident.

When three or more cars collide on the roadway, it is considered a multi-vehicle collision. This type of car accident is commonly caused by a “chain reaction,” when one car bumps into another, which causes the other to hit the next vehicle.

Dealing with the sudden death of a loved one can be overwhelming for the victim’s family. It may leave them vulnerable to manipulation by the opposing party and insurance companies.

While waiting for the official investigation results, the victim’s family is entitled to pursue a wrongful death claim with their attorney’s assistance. Through the wrongful death claim, the victim’s family can seek compensation for the damages such as funeral expenses, loss of companionship and income, emotional distress, and pain and suffering that the car accident has caused them.