You are here: Home / The Arash Law Blog / The Ultimate Guide to California Truck Accidents

A California Driver’s Handbook to Commercial Truck Accidents, Their Legalities & Statistics, Why They Occur, How We Can Help Prevent Them and Why You Should Hire an Experienced Lawyer

Due to their massive size and weight, accidents involving large commercial trucks are uniquely terrifying and dangerous. The trucking industry fuels our economy, and as consumer demand continues to grow, so does the demand for truck drivers and the number of trucks on our roads. The trucking industry is bustling and deadline-driven, putting a good deal of pressure on truckers to log ever more miles in shorter and shorter periods of time.

This often means that these professional drivers are working under extreme pressure and time constraints that can leave them exhausted, stressed, and more prone to serious accidents. Truck crashes are exceedingly dangerous accidents, and if you’ve been injured in a truck accident, you need the professional legal counsel of an experienced California truck accident attorney.

The Trucks on Our California Roads

The commercial trucks that we share our roadways with include a wide variety of vehicles that are specifically designed to handle unique facets of the trucking industry:

Tractor-trailers are also known as big rigs, 18-wheelers, and semi-trucks (or semis). Although the word semi-truck refers to the actual truck cab that contains the truck’s engine, we’ve come to call the combination of semi-trucks and their trailers “semis.” These are the most common type of commercial trucks that we see on our highways, and they are massive.

Semis transport consumer products across our nation’s roadways and delivery trucks deliver them to our doors. These medium-weight trucks carry all-important packages from carrier services like UPS, FedEx, and the U.S. Postal Service. The rise of online shopping has only increased the number of deliveries that take place each day in our neighborhoods.

There are also a variety of trucks on our roadways that do specific jobs, and they include heavyweights like dump trucks, cement trucks, furniture trucks, and the like. 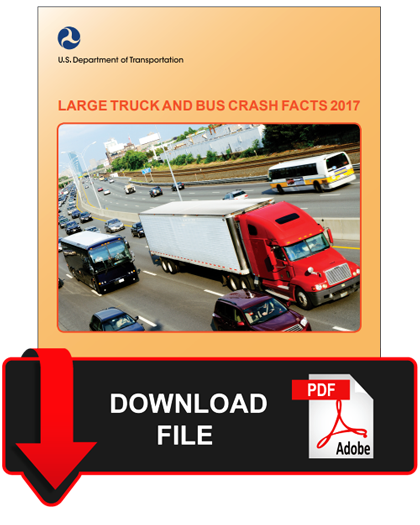 Truck Industry Statistics in the U.S.

In other words, the trucking industry is growing, and while trucks and buses, combined, make up about 9.6 percent of total VMT in the U.S., they are involved in 12 percent of all vehicle fatalities. Truck accidents in California happen, and they are often deadly. In fact, California was second only to Texas for the sheer number of large-truck fatalities in both 2015 and 2016.

Every traffic accident is dangerous, but when the accident involves a commercial truck, the danger is amplified by the sheer size and weight of the vehicle. Trucking is a hazardous profession, but it’s often the occupants of the other vehicles involved in truck accidents which are the most vulnerable to serious injury – or worse. As such, FMCSA shares statistics regarding 2016 Commercial Motor Vehicle Related Fatalities by the Numbers:

These statistics illustrate that commercial truck accidents are not only deadly but that they are also far more likely to kill the non-trucker motorists involved. Fortunately, in many cases, an experienced truck accident attorney in California can help victims recover compensation.

According to FMCSA, the vast majority of truck accidents are caused by truck driver error. Again, the trucking industry is desperately trying to keep up with demand, which often puts truck drivers under considerable pressure to perform. Nevertheless, truck drivers are professional drivers who are held to much stricter standards than non-commercial drivers. The critical reasons behind driver error are broken down into four major categories:

Recognition refers to the truck driver’s failure to adequately recognize and respond to the driving situation at hand. This failure can be caused by inattention, by distraction from something either inside or outside the truck, or by any other inadequacy of observation.

Decision refers to the driver’s failure to make good decisions related to the driving conditions present. Such decisions can include speeding (in general or in relation to the road’s condition), misjudging the speed that other vehicles are traveling at, and following other vehicles too closely.

Problems with performance often involve overperformance, including panicking behind the wheel, overcompensating for a driving error, or exerting poor directional control of the rig. Within these basic categories of truck-driver error are any number of associated factors that can play significant roles in resulting accidents.

FMCSA identifies The Top 10 Associated Factors When It Comes To Large Commercial Trucks and Their Drivers:

All told, there are myriad combinations of basic truck driver error combined with associated factors, and they are all extremely dangerous.

The Most Common Tractor-Trailer Accidents in California

Every commercial truck accident is unique with its own specific set of circumstances, but there are several kinds of catastrophic accidents that are most common:

As the name implies, rollover accidents involving massive commercial trucks are terrifying and exceedingly dangerous. Tractor-trailers, with their high centers of gravity, are prone to rolling when the conditions are right. Rollovers are classified as either tripped crashes in which the vehicle flips when it hits an obstacle like a curb or another vehicle and un-tripped crashes in which the vehicle’s momentum in combination with another factor like losing traction, unsafe driving, speeding, and/or encountering slippery roadways cause it to roll.

When a truck rolls over, it is often caused by driver error, such as

It’s important to recognize that when a semi rolls over, everyone on the roadway is endangered, and these accidents often lead to multi-vehicle pileups.

Semi-trucks are made up of two connected parts – the large cab that contains the engine and the massive trailer that follows behind and is connected via an articulated joint that allows the two parts to maneuver both separately and in tandem. This articulation is imperative for ease of safe movement on the road, but it also leaves these vehicles vulnerable to jackknife accidents. A jackknife accident occurs when the semi’s coupling device allows the trailer to fold in on its cab, much like the closing action of a jackknife’s blade.

Such accidents are naturally terrifying, and they’re often caused by truck driver error:

Speeding, cutting steep curves too closely, and ignoring the effects of weather conditions on the road are the factors most closely associated with deadly jackknife accidents.

Underride accidents are terrifying accidents that involve another vehicle plunging headlong into the underbelly of a big rig – either from the back or from the side. The roof of the smaller vehicle is often sheared off in the process. The Insurance Institute for Highway Safety (IIHS) estimates that underrides account for almost half of all semi/car accident fatalities. Giving 18-wheelers plenty of space on the road and always avoiding the massive blind spots that truckers experience on the sides of their rigs can help you steer clear of exceptionally dangerous underride accidents.

The IIHS finds that if tractor-trailers were equipped with durable side guards, it could potentially reduce the risk of serious and/or fatal side underride accidents by almost 75 percent. Many safety groups have been vying for such mandatory safety guards for years, but the trucking industry has so far successfully fought this outcry by citing the additional weight, the added expense, and the potential difficulty of maintaining the physical integrity of the commercial truck while supporting the addition. It’s worth noting, however, that after the tragic death of Hollywood starlet Jane Mansfield many decades ago, rear safety guards – known as Mansfield bars – were legally mandated.

Semis are many, many times heavier and larger than the vehicles that we drive, and as such, they require much longer stopping distances. FMCSA reports that a fully loaded semi-truck that’s traveling at highway speeds on good roads can take the length of nearly two football fields (placed end to end) to come to a full, safe stop. Inclement weather, inferior road conditions, poorly loaded freight, overweight hauls, and driver error such as speeding can increase this stopping distance considerably. As such, rear-end collisions involving trucks barreling into unsuspecting motor vehicles on the road are a common form of truck accident. Protect yourself by taking trucks’ increased stopping distances into careful consideration, by not cutting in front of commercial trucks, by avoiding the large swath of blind spots all the way around big rigs, and by yielding the right of way to the immensity of semi-trucks – attempting to outmaneuver a semi-truck is ill-advised.

If a truck accident has left you or your loved one seriously injured – or worse – you are likely at a loss regarding where to turn for help. The dedicated California truck accident lawyers of Arash Law have the experience, skill, and compassion to aggressively advocate on your behalf for the compensation to which you are entitled. Our legal team is standing by to help – 24 hours a day and 7 days a week – so please give us a call us at 888-488-1391 today.