Roundabouts Are Safer Alternatives To Traffic Signals and Stop Signs

You are here: Home / The Arash Law Blog / Roundabouts Are Safer Alternatives To Traffic Signals and Stop Signs

Roundabouts are used throughout the country. If you travel across America, you will see an increasing number of roundabouts replacing traditional intersections everywhere. This change in road design became a popular trend, and the trend continues because of its positive effects. Despite the advancements, roundabouts have caused some challenges as drivers get used to them being the new normal. To learn more about roundabouts and how they affect driving conditions, continue reading.

While city planners and other leaders work hard to make roads safer for everyone traveling each day, accidents still happen. When you get into a car crash, you need an attorney to help protect your legal rights and get you the compensation that you deserve. The California car accident lawyers at Arash Law have decades of experience helping injury victims get the money that they need to recover fully. We want to help you, too. Call our office today at (888) 488-1391 to schedule a free consultation.

What Is a Roundabout? 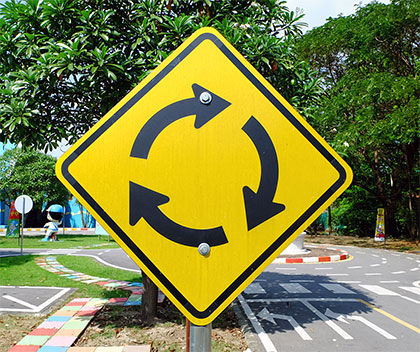 A roundabout is a circular intersection that has replaced traditional intersections in many American cities. A roundabout’s design helps increase road safety and improve traffic flow efficiency. Drivers travel in a single direction, decreasing driver speed and the number of accidents at intersections.

The History of Roundabouts

Roundabouts have existed since the 1960s. They were first used in the United Kingdom, and they have slowly become more popular across the world since their inception. While roundabouts exist in many cities across the United States, they are currently more commonplace in other countries, including France and Australia. However, the United States is following suit with the rest of the world. The first roundabout was installed in Nevada, and other cities and states have continued the trend.

Roundabouts are a response to the large number of crashes at traditional intersections. There was a need for a change in road design to increase the safety of drivers, pedestrians, and cyclists. Thus, the roundabout was born. Roundabouts have proven to increase traffic safety across the United States.

Roundabouts decrease the number of accidents at high-volume intersections. There has been an increase in safety for everyone that shares the road.

The United States missed an opportunity to decrease its carbon footprint in the years cities refused to install roundabouts. The IIHS found that if the United States had converted from traditional traffic signals and intersections years ago, it would have reduced the number of vehicle stops by 981 million hours and reduced fuel consumption by 654 million gallons. Clearly, roundabouts seem to be better for our world and better for our experience in traffic.

Roundabouts take much more space to build than traditional intersections. Despite the safety benefits that roundabouts provide, some areas cannot geographically support a roundabout. City planners must consider the geometric needs before a roundabout is built. In addition to the size needs, city planners should account for the traffic volume that is typical for the area, entrance and exit roads, topography, land use, etc. Areas with a high traffic volume are usually not chosen as areas to build a roundabout.

Roundabouts increase safety for everyone who shares the road. Changing traditional traffic signs and lights has proven to be worth the time and expense for many cities. Benefits of using roundabouts include: 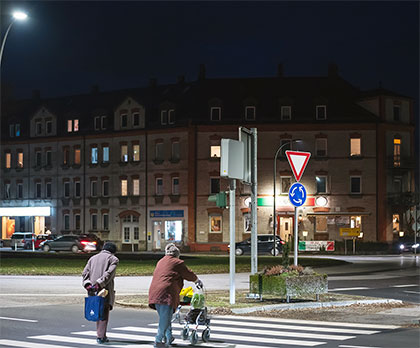 Roundabouts are particularly beneficial for pedestrians. The design of roundabouts gives pedestrians more time to cross the street. Because traffic flows one way in a roundabout, pedestrians only must watch out for oncoming traffic from that direction. Drivers using a roundabout naturally travel slower than at traditional intersections. Because of that, there are fewer crashes at roundabouts caused by speeding drivers.

Other statistics on how roundabouts benefit pedestrians include: 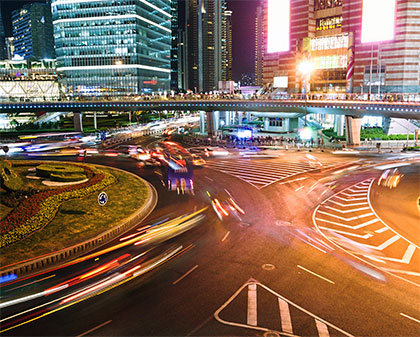 Getting familiar with new road designs like roundabouts can be challenging for any driver. When the status quo changes, the chances of accidents increase. If you have suffered an injury in an accident, you need an injury lawyer in California to help preserve your legal rights.

Change may always bring about hesitation from the public. Drivers were uninterested in learning something new when roundabouts were poised to take over traditional intersections in many American cities. However, once everyone got used to how roundabouts were used, opinion turned around.

The Insurance Institute for Highway Safety (IIHS) discovered the following after conducting a study of drivers who were new to roundabouts in their communities:

Effects of Roundabouts on Senior Drivers

Because older drivers are not used to the structure, they are more hesitant to use roundabouts instead of traditional intersections. Despite their resistance to the change, however, the elderly may be the group most likely to receive the most benefits from using roundabouts. Elderly drivers are involved in more intersection crashes than any other demographic.

The Insurance Institute for Highway Safety collected data on how roundabouts affected senior drivers. Although there is no clear-cut evidence on whether the use of roundabouts makes driving safer for older drivers on their own, there is some evidence that suggests that using roundabouts cuts down on the safety issues that many elderly drivers face. Some of the IIHS’s findings include:

The IIHS conducted a study where it surveyed the elderly population of six communities. The result of the survey are as follows:

In addition to using roundabouts, the IIHS found that using lights and pavement markings helps older drivers feel more confident, safer, and more comfortable while behind the wheel.

The installation of roundabouts across the United States is a road design advancement that has increased driver safety. While this safety improvement should be celebrated, roundabouts have not eliminated traffic accidents. Unfortunately, we live in a world where people make careless mistakes, and sometimes people get hurt. If you have suffered an injury in a traffic accident, that is where the legal team at Arash Law steps in to help.

At Arash Law, we have decades of experience helping accident victims get their lives back on track. We are passionate about working on getting each of our clients the compensation that they deserve after an accident. In our decades of experience, Arash Law has recovered more than $400 million in compensation for those who chose to trust us with their case. We want to help you, too. Call us today at (888) 488-1391 to schedule a free consultation.