You are here: Home / The Arash Law Blog / A Deep-Look at the 2021 WHO Global Status-Report on Road Safety and Traffic Injuries

The World Health Organization (WHO) – despite two years of concentration on a worldwide pandemic – has continued to focus on its traditional interests in other significant risks to human health around the world. Of particular interest among these offerings is WHO’s 2021 report on injuries in road traffic.

Injuries in road traffic have a surprisingly large impact on world health and economics. 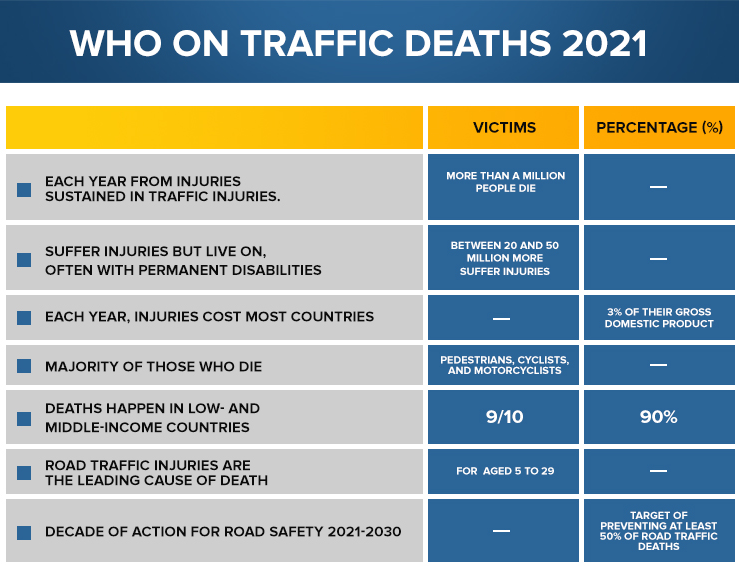 Who Are the Likely Victims?

WHO classifies potential victims by age, gender, and socioeconomic status. The vast majority (more than 90%) of road traffic accident deaths happen in countries of lower economic status, particularly throughout the African continent. Even in higher-income countries, traffic injuries happen most often to the poorer members of society. Interestingly, from a very young age, victims of fatal road accidents are most likely to be males under 25, who are nearly three times as likely to die in a car accident than young women. Finally, road accidents are the leading cause of death of males and females from age 5 to 29.

Children present such a high risk of road traffic injury and death for several reasons. First, children’s inherent limited physical, cognitive, and social skills make them more vulnerable than most adults. Further, because they are small, they can be difficult to see in traffic and may also find it hard to see dangers presented by the traffic. Moreover, their not-fully developed muscular/skeletal systems make them more vulnerable to severe injury, particularly head injuries, than adults.

Children also have difficulties understanding, seeing, and even reading the signs and signals present in road traffic. Finally, children are impulsive when very young and risk-takers when reaching adolescence, both factors that increase the risk of injury and death in traffic accidents.

What Are the Common Risks?

How Can We Change This Picture?

First and foremost, governments must act to address road safety as a national priority. Coordinated actions by legislatures, law enforcement, road engineers, road designers, and those who operate national health systems can create an environment in which road safety is more adequately addressed throughout the world, with a concomitant reduction in injury and death.

How Is WHO Helping?

WHO is actively reaching out to provide a variety of assistance in addressing road traffic injuries.

How Arash Law Is Helping

Long a leader among car accident lawyers in California, with decades of experience helping victims of accidents, Arash Law is involved in counseling clients and potential clients about road safety and what to do after an accident. With offices throughout California, Arash can bring its long experience and thorough knowledge of handling accidents to your case. Contact us today!