You are here: Home / The AK Blog / Meet Graham – The Human Evolution of Car Accident Survival 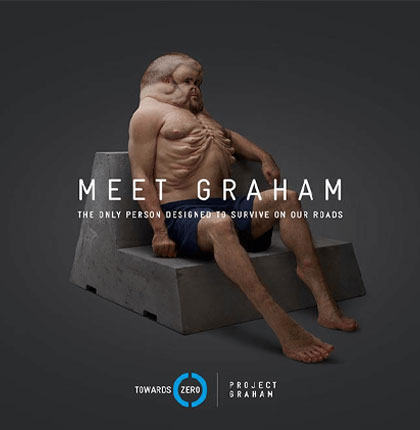 Cutting-edge technology is being used in Australia to demonstrate just how vulnerable humans are to the collision forces caused by an auto accident. Victoria, Australia, has become known for its dramatic road safety campaigns. Now, the Transport Accident Commission has partnered with a leading trauma surgeon, a crash investigation expert, and a notable Melbourne artist to produce Graham. Graham is “an interactive lifelike sculpture demonstrating human vulnerability.”

Graham is much more than a sculpture, however. Graham has been designed with features that might have been present in humans, had we evolved to withstand the forces of a brutal vehicle collision. Humans evolved long before cars were invented. Our bodies are not designed to handle the strong forces created by a clash between two massive, powerful vehicles. By sculpting a model of how humans would have to evolve to withstand such forces, the Victorian government hopes to show just how vulnerable we are while on the road.

In addition to interacting with Graham online, the public can also use Google Tango (a comprehensive augmented reality technology) to better understand Graham’s features, and how they would protect him in a collision. The Victorian government has also produced educational guides and school curriculum for students who study Graham.

Graham is a dramatic departure from standard human features. By merely looking at photos, one can see how different he is from current human development. It is a stark reminder of the fact that currently, humans are woefully unprepared to withstand the forces of a car accident. This is why so many accidents are fatal.

Just How Low is Human Tolerance for Collisions?

To fully comprehend just how vulnerable we are in collisions, it is helpful to look at fatality rates based on speed. The Meet Graham project reports that speeds as low as 30 kilometers per hour (just under 19 miles per hour) can be fatal without any protection. This is why pedestrians are so vulnerable to injuries, and why pedestrian injuries are so much more likely to be fatal. They have no protection from the force of a collision. Unlike vehicle occupants, who are protected by airbags and seat belts, pedestrians are subject to the full force of a heavy steel vehicle crashing into their bodies.

We have made great progress in implementing safety measures that reduce these numbers significantly. Many auto accident victims are able to survive collisions that occur at speeds of 60 miles per hour or even higher. This is largely due to enhanced steel vehicle frames, airbags, and seatbelts. The next generation of safety features (like automatic braking, backup cameras, and lane drifting warnings) will likely show even more progress in reducing accident fatality rates. But we must always remember that these are merely safety tools. Ultimately, we are vulnerable humans whose bodies are woefully unprepared to withstand the trauma of a vehicle collision.

The Features That Protect Graham in an Auto Accident

In order to create Graham, scientists considered what features would be necessary to protect a human in a car accident. The scientists then worked with Melbourne sculptor Patricia Piccinini to create a model for these features. Here are the features that protect Graham from the forces of a collision: 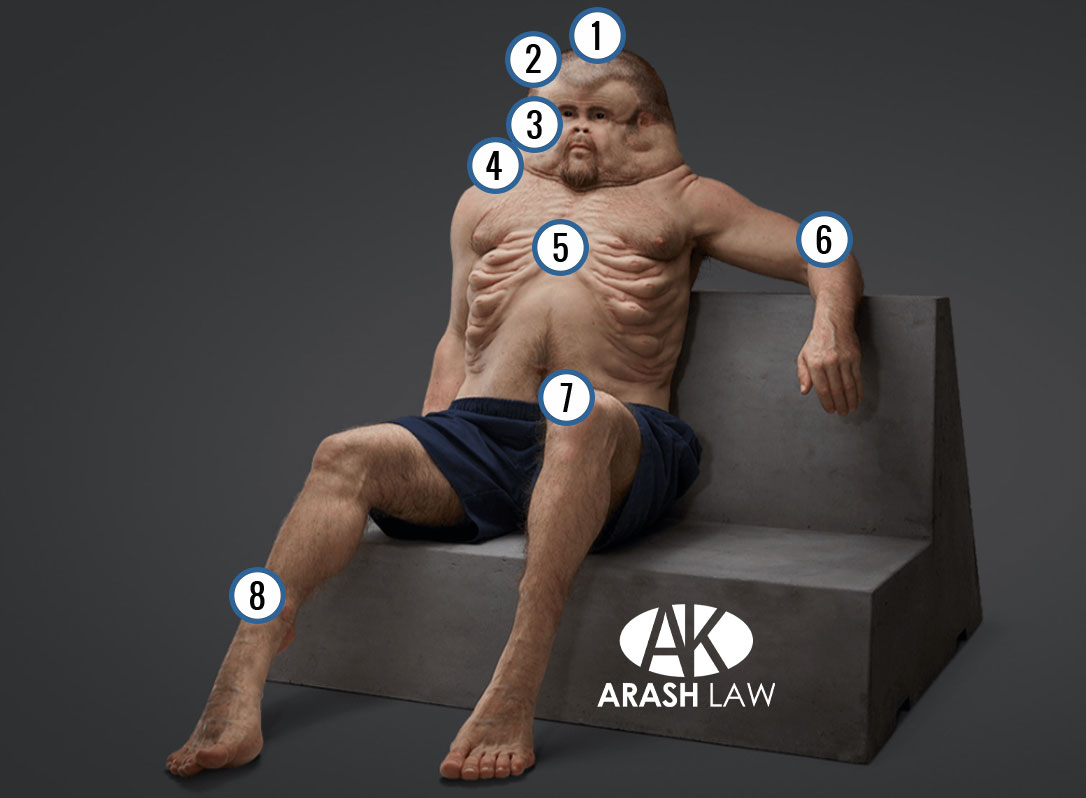 As Graham shows us, the human body is nowhere near strong enough to withstand the forces of a vehicle collision. None of us will have hile s resilient properties in our lifetime. This is why auto accidents are so painful and devastating for the victims involved. Negligent drivers have a legal obligation to compensate injury victims for the many losses associated with auto accident injuries.

This includes not just lost wages and medical bills, but also pain and suffering, and the loss of enjoyment of your life. Unfortunately, insurance companies have many tactics and strategies that they use to try to get out of paying a fair settlement offer. At Arash Law, our experienced California personal injury attorneys know how to protect you from these games. Call (888) 488-1391 today to schedule your free consultation with one of our auto accident lawyers. They fight hard to ensure that all accident victims are fully and fairly compensated for the many losses they suffer.