Can Kids Legally Ride on Backs of Motorcycles?

You are here: Home / The Arash Law Blog / Can Kids Legally Ride on Backs of Motorcycles?

At What Age Can a Child Ride On The Back of a Motorcycle?

The National Highway Traffic Safety Administration reports that in 2017 there were 16 deaths of motorcycle-riders who were under the age of 20.

Some of the nation’s deadliest motorcycle accidents in 2017 occurred in counties such as Los Angeles, Riverside, and San Diego. Still, no California law prohibits minors from riding the back of a motorcycle. Despite a lack of security devices and no protective metal-shell like in a car, kids may ride motorcycles in California provided that they meet specific requirements.

Are Kids Legally Allowed to Ride as Passengers on Motorcycles in California?

Kids can ride as passengers on motorcycles in California. Even though the nation’s seat belt legislation says that children under the age of eight should have appropriate security restraint harnesses when riding in motor vehicles, these laws do not apply to motorcycles. Kids don’t have to wear seatbelts on motorcycles, even though this can keep them slightly 20 Safe-Driving Technologies Available for Cars That Help Prevent Accidents in 2020.

If you must have a child passenger ride on the back of your motorcycle, do this as quickly as possible. Most authorities agree, however, that parents should avoid driving children on the backs of motorcycles when possible. In an accident, kids can endure devastating and deadly injuries, such as traumatic brain injury, spinal cord injuries, or organ damage. While a grownup motorcyclist can understand and accept those risks, kid passengers can’t.

Age Requirements for Riding on Motorcycles

California doesn’t have an age requirement for children to ride on the backs of motorcycles. Instead, there’s an overall height requirement – the same as the obligation for using a security restraining device in motor vehicles. 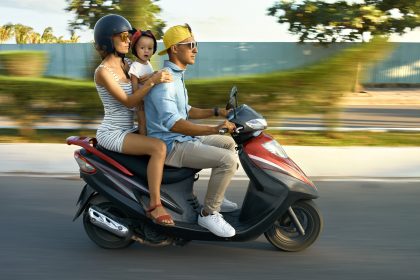 A child has to be four feet, eight inches tall to ride on the back of a motorcycle. This is the height where a child no longer needs a car seat, and where a child can reach motorcycle passenger footrests. If a child is too short to reach the footrests, chances are the kid is an unlawful passenger.

This was probably the case of the tragic California passing of 4-year-old Breann Creer while riding on the back of a Harley-Davidson. Though no charges were ever formed against the driver of the motorcycle (her mom’s boyfriend, who also suffered extensive injuries from the accident),

It’s uncertain whether Breann was tall enough to ride the back of the motorcycle based on California standards. The accident happened when a tractor-trailer made a U-turn in front of the motorcycle. The U-turn was a legal move for the truck to perform.

I WAS IN MOTORCYCLE ACCIDENT

Allowing kids to ride as motorcycle passengers is a controversial topic, with lots of differing opinions. However, California law allows it provided that the child can get to the motorcycle’s passenger footrests and the kid is wearing a helmet.

Whether parents should let kids ride motorcycles is another question, but as long as passengers take the necessary precautions, they usually will not be responsible for following injuries to, or even the death of, the child.

If your child suffered injuries in a motorcycle accident, seek counsel from an experienced motorcycle accident attorney. You might have grounds to file a claim against the motorcycle driver, another driver, a parts manufacturer, or a different party who may be accountable for damages.

A California motorcycle accident lawyer can help you work through the details of your situation. Arash Law is conveniently located across California with offices in Los Angeles, Riverside, San Jose, San Francisco, Sacramento, San Diego, and Sherman Oaks.